I Wish my Son was a Dog

Let's just say this out loud: Harrison's Fund does not hate dogs. We don't hate any animals. In fact, two kittens have just found a loving home at the Smith household (although, if I'm honest, I think Harrison likes them a bit more than I do).

I recognise that our new ad is controversial, but we're pretty confident that it won't adversely affect donations to animals' charities. The UK is a nation of animal lovers and that's something to be proud of. It's just that sometimes the distribution of charitable donations seems, well, a bit bizarre.

Put it this way, The Dogs Trust, who do excellent work, raised £71 MILLION more than Harrison's Fund in 2014 (Charity Awareness Monitor figures). But, it's hard to draw direct comparisons so we did our own test, running two identical digital ads for a week, one featuring a picture of a dog we found on the Internet and one featuring Harrison. Irritatingly but unsurprisingly the dog ad was clicked on twice as much as the one featuring my beautiful son.

And the tragedy is that medical research to develop a cure for Duchenne is the only hope our kids have. In short, we're desperate.

Duchenne kids are usually in a wheelchair by the time they're 12 and most die in their late teens or early twenties. It's the most common fatal genetic disorder to affect children around the world, yet figures show that public awareness in the UK is below 1%.

I'm sorry if some people find our tactics upsetting, but the awful truth is that my son is dying and I'm willing to do whatever it takes to save him. The vast majority of responses so far have been positive and the support we've received has been overwhelming.

Every donation, no matter how small, is a huge help. If you'd like to find out how to donate click here 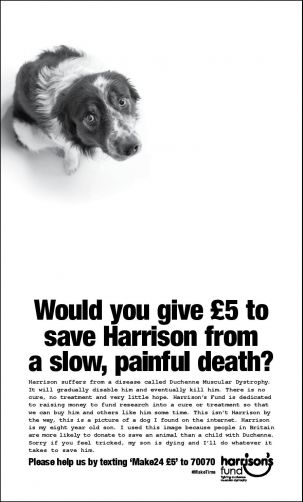